Olympic show jumping legend Graham Fletcher and son took to the showground today to put brand new facilities to the test ahead of the Great Yorkshire Show.

Oliver Fletcher, aged 14, rode horse Dahar over fences on the new collecting ring surface which has had a £70,000 revamp, bringing it up to international standard.

Developed for the London 2012 Olympics, the surface is the most scientifically researched and endorsed by the Fédération Equestre Internationale (FEI).

Olympic medallist Mr Fletcher, who’s originally from Thirsk in Yorkshire, travelled up to the showground from his home near Oxford.

He is part of the show jumping committee formed by YAS to ensure the equine facilities are of a world-class standard.

Son OIiver is set to compete in on all three days of the show this year. He will take part in the Badsworth Stakes on Tuesday, July 11, on Wednesday, July 12 he will compete in The Rudding Park Great Yorkshire Championship and on the final day, Thursday, July 13 he will be in The Yard Equestrian Junior Class before hoping to take on the legendary Cock O’the North course. A title won four times by dad Graham.

Graham said: “The Great Yorkshire Show is my favourite national show and a place where I have won many classes including the Cock O’ the North. Even though I haven’t lived in Yorkshire for a number of years it still means a lot to me and I have stayed a strong supporter.

“Nothing will give me greater pleasure than seeing Ollie do well this year and in the years to come win more than I did.”

Nigel Pulling, Chief Executive of Yorkshire Agricultural Society which is behind the major investment into the new facility, said: “This investment marks the Society’s work to keep the facilities at the showground of a world class standard. We want to attract the best riders and the best horses to ensure the Great Yorkshire Show is at the top of its game and continues to host national and international competitions.” 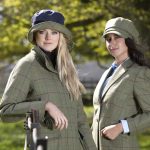 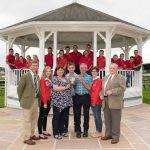