An Action Packed First Day at the Great Yorkshire Show

Some of the biggest titles of the day were decided in the Cattle rings with two national breed society shows naming their champions and the best of the best battling it out for the coveted Supreme Beef title.

The cream of Charolais and Beef Shorthorn from across the country showcased their animals at their national society shows.

It is the first time the British Charolais Cattle Society has held its national championships at the show and a record 72 entrants contested the 11 classes and six championships, with the breed championship going to Dorset-based Mr and Mrs A White’s cow, Balbithan Iona

The UK Beef Shorthorn Championship, now in its fourth year at the show, attracted the highest number of entries for any cattle breed. The show held 99 classes and four championships, with Mrs Mrs TL Severn of Halifax taking overall breed champion with her bull, Millerston Jester.

All eyes were on the judging of the Supreme Beef Championship later in the afternoon with the prestigious accolade going to British Simmental cow Popes Princess Cleo, owned by the Wood family of Dutton, Preston, and shown with calf by father Jimmy and daughter Hannah. Reserve went British Limousin bull Foxhillfarm Lordofthering owned by Michael and Melanie Halford of Devon.

A very special award was presented for the first time. The Michael Spink Memorial Perpetual Trophy, honours 24-year-old dairy farmer, Michael who was tragically killed in January while working in New Zealand. Passionate about Ayrshire cattle and a long standing member of Knaresborough Young Farmers, the trophy was presented to the winner of the Ayrshire Heifer Champion. The first recipient of the award was won by Richard Baynes of Hexham with his Ayrshire heifer, Marleycote Sea Lily. The trophy was presented on the Spink family’s behalf by Michael Warren, who has been Ayrshire steward at the Show for 59 years.

In the Main Ring it was the turn of the Ridden Hunters. Winners of weight classes, which have some of the highest entries in the equine section, went through to the Hunter Championship, won by Robert Walker riding Mrs J Day’s View Point. Yorkshireman Robert, now based in Cheshire, said after attending the show since childhood, winning was always the “best ever”! Reserve went to Jane Ross riding the Shades of Grey Syndicate’s Bloomfield Excelsior.

From fashion to horticulture, the Doncaster Cup was awarded to the winner Richard Reah of North of England Bonsai in Thirsk who had the Best Floral Exhibit at the Garden Show.

This year’s winner of the Yorkshire Agricultural Society White Rose What’s Next Innovation Award was Lambert and Dyson Ltd of Skipton.

The award showcases the very best in agricultural technology designed to make a real improvement in the lives of Yorkshire Farmers and the rural community as a whole.

A farmer who has seen many changes over the years was the recipient of the Yorkshire Agricultural Society and Royal Agricultural Benevolent Institution (RABI) Lifetime Achievement Award. Carol Rymer received her award from President Elect Bill Cowling on the President’s Lawn.

Show Director Charles Mills said: “It has been a fantastic start to the three days. We are really looking forward to the next two days and there will be plenty to see as well as some great competition to come.” 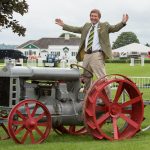 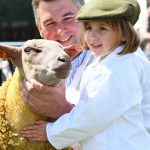