A marriage proposal excited visitors to the Great Yorkshire Show today when a plane flew over the showground asking for a hand in marriage.

Keighley army veteran Luke Davison proposed to girlfriend Ashley Addy at the top of the big wheel as a plane flew over with a banner said “Ashley Addy will you marry me”.

The answer from Ashley was a resounding “yes” and the couple returned to earth to be congratulated by delighted family members, including Ashley’s parents, two sisters and Luke’s brother.

“It was a complete surprise, I had no idea what was happening. I didn’t see the plane at first, Luke had to get me to turn around and look!” said Ashley, proudly wearing a sparkling engagement ring.

“I said ‘yes’ straight away – it’s wonderful,” she added.

Luke and Ashley have attended the show together every year since they met three years ago, thanks to Ashley’s love of horses and their shared interest in all things rural.

Luke said: “We went on the big wheel not long after we first met and Ashley has always loved the amazing views and being able to see the whole showground and everything that is going on. She is in her element and it has become a tradition as an early birthday celebration for her.”

Luke, who is a gas engineer, was formerly with the 3rd Battalion Yorkshire Regiment and served on two tours of Afghanistan. He left the Army with Post Traumatic Stress Disorder three years ago and credits Ashley with helping him to get his life back on track. The couple recently bought a house in Keighley but their long-term aim is to buy a farm house where they can pursue their dreams of rural life.

Ashley is an office manager for her father’s business, while Luke is also Chairman of Keighley Armed Forces Association. The couple hope to start a family soon. 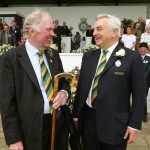