The 160th Great Yorkshire Show will take place in Harrogate in 2018, celebrating the very best of farming, food and the countryside.

Over 130,000 visitors and 8,500 animals flock to the Great Yorkshire Showground every year for the three day show, making it one of the biggest in the UK.

Get ready to welcome equestrian dynamo Lorenzo back to the Main Ring with his daredevil bare-back display as one of the 2018 show highlights. Rosemary Shrager will whip up a storm in the cookery theatre and the President’s Lawn is set to showcase some very special additions for the first time ever.

In the judging rings, thousands of animals will compete from cattle to sheep, pigs to pigeons and the show finishes with one of the most prestigious showjumping classes in the country, the Cock O’The North competition.

From cutting edge farming equipment and machinery to displays from big name brands, this is the place where deals are done and the latest ranges are showcased. While the show has agriculture at its heart, there’s also entertainment, shopping, live music, cookery demos and a professional catwalk fashion show – including a one-off celebrity special.

Plans are now underway to celebrate 160 shows spanning the decades since 1838, with a host of special surprises lined up to mark the milestone. As part of this, show organisers are set to launch a limited edition clothing range in the New Year. Look out for a stunning ticket launch in Spring 2018 too!

1838: First Great Yorkshire Show held in the Barrack Yard of the 5th Dragoons at Fulford, near York.
1839–1841: The show is held in Leeds, Northallerton and Hull.
1842: GYS returned to York and first attendance figures recorded: 6,044.
1874: Hugely successful show in Sheffield with attendance of 64, 111 (nearly double any previous shows)
1914: Largest recorded show held in Bradford with attendance of 82,461 (not exceeded until 42 years later)
1915-1919: Show is cancelled due to the First World War.
1920: GYS held jointly with the Royal Agricultural Society of England in Darlington.
1926: GYS held on The Stray in Harrogate and was “the most successful in the history of the Society”.
1931: GYS held in fields off Long Lane, Dalton, Huddersfield.
1937: GYS held on York Knavesmire “widely considered to be one of the best show sites in Britain.”
1939: GYS held in Halifax, two months before the country went to war.
1940-1948: Show is cancelled due to the Second World War.
1949: GYS held in Wakefield and the Society decide to purchase a permanent showground.
1950: Last “roaming” show in Malton. The Society bought a 200-acre site overlooking Rudding Park, Harrogate.
1951: First show held at the permanent showground, with attendance of nearly 54,000.
1957: 100th show sees visitor numbers soar to 118,593.
2001: Show cancelled due to the outbreak of Foot and mouth disease in Britain.
2002: Highest attendance for more than 20 years and since then attendance has never dropped below 120,000.
2006: Record breaking visitor numbers of 135,111.
2008: The show was attended by the Queen to celebrate the 150th show.
2012: First ever show to be cancelled due to weather after unprecedented rainfall (after the first day).
2018: This will be the 160th Show. 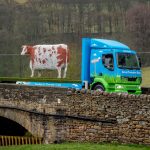