THOUSANDS FLOCK TO THE SHOWGROUND FOR COUNTRYSIDE LIVE

Thousands of visitors flocked to Countryside Live over the weekend in a jam packed event which welcomed special guests, exciting competitions and plenty of fun for the family.

Peter also presented prizes and met some winners in the beef and sheep rings while Amanda took to the sheep rings to see some of the rarest in the UK who were with the Rare Breed Survival Trust.

Double Olympic British Show Jumper Geoff Billington made his debut with breath-taking displays in the indoor equine arena. There was also entertainment in the Tipsy Heifer pub from Stray FM presenters Will Smith and Nick Hancock.

Charles Mills, Show Director, said: “We’ve had a terrific weekend, welcoming thousands of visitors into the Showground in some stunning Autumn weather. Children enjoyed hands on activities, there was the wonderful cookery theatre and Meet the Farmer section. We’ve also seen some fierce competition across all the animal classes with some fantastic winners.”

The Supreme Champion Beef Beast title went to Mark Harryman and Sarah Warriner who farm at Pickering. Their 17-month-old British Limousin heifer, Midnight Star, had previously won Champion Commercial Beef Heifer at the Great Yorkshire Show. Sarah said: “It is an amazing achievement to win in our home county with a home-bred heifer.” The reserve title went to Phil and Sharon Sellers of Lincolnshire with another Limousin heifer, Fancy That.

Top prize in the Sheep section, the Supreme Champion Pair of Butchers Lambs, also stayed in Yorkshire and again followed on from success at the Great Yorkshire Show, with Hannah Brown of Leyburn taking the title with a pair of Beltex which had triumphed at the summer show.

The BPSP Lemieux Heritage Mountain and Moorland Ridden Olympia Qualifier was fiercely contested, with more than 70 entries across the six classes.

The title for the best rabbit in the Rabbit show went to Adele Wray of Wilmslow with a Marten Sable Rex, a second Best in Show for Adele in three years.

A Malton family had plenty to celebrate in the Pigeon classes, with Best in Show going to Adrian Knaggs with a Norwich Cropper, while his brother David took Reserve Best Young Bird with an Oriental Frill.

The Poultry Supreme Champion title went to Ian and Louise Simpson of Nottinghamshire with a male Australorp Black, while reserve was John Halley of York with a trio of waterfowl.

Action in the main ring for the Northern Show Cross championships was fast and furious, with 29 teams in the junior 70cm class and 30 in the 80cm. Triumphant in the 70cm were Charlie’s Angels, made up of Sarah Proudly of Stokesley, Jake Gibson of Pickering and Charley Rae Nelson of Otley. The senior honours on Sunday went to the Cronkhill Paddocks – Lisa Broxup and Sophie Andrews of Wakefield and Chloe Carnaville of Barnsley – in the 80cm and Horners Hornets – Emma and Sarah Horner and Caroline Dennis – in the 90cm.

In the Honey Show, the trophy for the best exhibit in all classes went to Barnsley beekeeper Andrew Woolhouse with six one pound jars of honey. Andrew, who received his trophy from Yorkshire vet Peter Wright, won his first best in show at his first show in 2013. He said: “I’ve been trying to reach the same high accolade ever since and I am overjoyed!”

There was also triumph for Charles Smailes of Pickering, a member of Whitby Beekeepers Association, who won the trophy for the most points in the show, picking up another three trophies along the way. 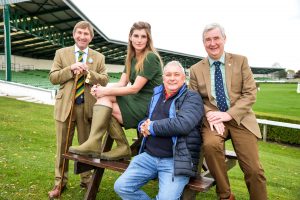 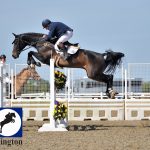 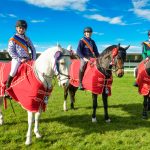