Thousands flocked to the first day of the Great Yorkshire Show – the biggest showcase in England for food, farming and the countryside.

The first major livestock championship of the Show, the Supreme Beef, was won by a two-year-old Simmental bull, Heathbrow Important, owned by David Sapseed of Hitchin in Hertfordshire, while Reserve went to Lincoln Red bull Foulness Ultra owned by Robert Mawer of Woodhall Spa, Lincolnshire. Judge Peter Donger said both animals were lovely examples of their breeds.

Red Shepherdess Hannah Jackson opened the new Gen Z area to promote agricultural careers to teenagers. The addition to the show has been created to showcase the opportunities available in the sector for young people and school leavers.

A group of women from the Sheffield and District African Caribbean Community Association, some from the Windrush generation, were able to reconnect with their farming roots when they visited the Show for the first time, meeting exhibitors in the National Longhorn Championship.

The prestigious Doncaster Cup for the best in the Garden Show was won for the second year running by a display of carnivorous plants from Wacks Wicked Plants of Scampston. Garden Show steward Martin Fish said he could not remember the last time the Cup had been won in successive years by the same exhibitor. Winner Peter Walker, who is from Harrogate originally, said: “I am absolutely delighted to win again, if somewhat surprised! Reserve went to the Scarborough-based Yorkshire Pelargonium and Geranium Society at their very first Great Yorkshire Show.

New technology was recognised in the Yorkshire Agricultural Society’s White Rose What’s Next Award for Innovation which this year went to the JFC Agri Calf Isolation Unit. The unit allows farmers to treat sick calves in isolation and avoid cross contamination. Presented with the Rosebowl by Jenny Penty, National Sales Manager Sue Taylor said they were delighted to have won.

“Bringing a bio-security item to market involves lots of research and work. To have that recognised at such a prestigious show as the Great Yorkshire Show is wonderful.” 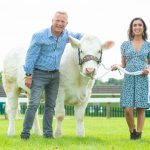 Gearing Up for the Great Yorkshire Show Tomorrow2019 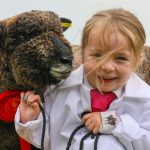